What is Alcoholics Anonymous (AA)?

Alcoholics Anonymous (AA) is an international fellowship consisting of people who have had a drinking problem. It is self-supporting, nonprofessional, multiracial, apolitical, and available in many places across the globe. There are no age or education requirements.

Alcoholics Anonymous is open to anyone who wants to quit drinking. Members are encouraged to attend AA meetings.

Anyone can attend an AA meeting. An open meeting welcomes members of the public. A closed meeting is for AA members only.

Only those with a drinking problem can become AA members or attend closed meetings. People with issues other than alcoholism can join Alcoholics Anonymous only if they also have a drinking problem. The only eligibility of membership is a desire to quit drinking.

People involved in mutual support groups like AA may be more likely to remain abstinent than those who attempt to quit drinking alone. Additionally, people who seek professional treatment or counseling for their drinking problems sometimes experience better results if they include participation in AA meetings along with their treatment program.

AA and other manualized 12-step recovery programs can result in higher rates of continuous abstinence over months and years compared to other treatments like cognitive behavioral therapy.

Al-Anon is a similar group, except it is for the family members and friends of those struggling with an alcohol problem.

How Does AA Work?

During AA meetings, members share their experiences with others seeking help with a drinking problem. The AA program, outlined in the Twelve Steps, provides the person with an alcohol addiction a way to create a happy and satisfying life without alcohol.

People who have never attended an AA meeting may have misconceptions about how they work due to portrayals in the movies or on television.

Open AA meetings, which anyone can participate in, are usually ‘speaker meetings.’ Speaker meetings involve a member of AA telling their story of their battle with drinking.

Most AA meetings are closed for members only. A typical Alcoholics Anonymous meeting is a topic discussion meeting. The person leading the meeting selects a topic, and members take turns sharing their experiences.

Some AA groups are held for a specific purpose like the 12-step study groups, or beginners’ meetings hosted to teach newcomers about the basics of the program.

What are AA Chips?

AA chips, also known as sobriety tokens, are small, round-shaped tokens given to members of a 12-step program. This includes Alcoholics Anonymous (AA) and other types of sobriety groups. Those giving them out can purchase them at a token shop or online. 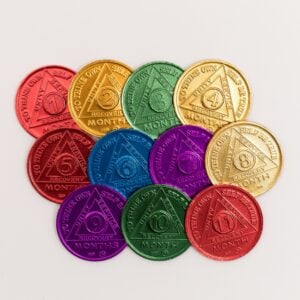 Sobriety tokens are often used to mark the impressive achievements of people who are in sobriety and recovery. Receiving a sobriety token is usually gratifying to the person in recovery. These AA tokens help keep a person motivated during their recovery.

These recovery chips often remind the person of the struggles they have overcome and the success they have achieved. While these tokens usually have the same overall meaning, they may have special significance to you if you are the one receiving them.

For example, the white sobriety token represents 24 hours or one day. This token is received on the first day of recovery. It is also meant to give the individual hope for continued success during their journey of healing.

The white recovery coin is also given to people who relapse. It represents their first day back to sobriety.

If you or a loved one is trying to get sober or are in recovery, understanding these recovery gifts can help you get through this challenging time in your life.

The History of AA Chips

Early in the history of the 12-step program, there is evidence that many AA members carried momentos to remind themselves of their commitment to recovery.

Sister Ignatia was a nun who worked with Dr. Bob to arrange a hospitalization program at St. Thomas in Akron. Sister Ignatia was known to be the first person to give medallions in Alcoholics Anonymous, beginning in 1939.

Many people say that sobriety chips followed the model of challenge coins by acknowledging milestones of accomplishments.

How Does the AA Chips System Work?

If you are new to sobriety, you may be wondering how sobriety chips work. Today’s practice of giving AA sobriety chips is used to celebrate successful recovery milestones.

The use of AA sobriety chips differs from group to group, but many fellowships provide chip or medallion nights to celebrate the individuals receiving a token. Other fellowship groups hand them out during AA meetings.

Although each group works differently, sobriety plastic chips are usually given to members at various points during their first year of recovery. These points typically include one month, three months, six months, nine months, and one year. However, many other milestones may be honored with AA chips, such as 30 days, 60 days, 90 days, and so on.

Collecting the chips are meant to make AA members feel supported, motivated, and loved. It is also a reminder that you are not fighting alcoholism alone.

It is important to remember that as all AA groups are autonomous, honoring sobriety milestones differ depending on the local group.

Alcoholics Anonymous medallions and coins are small, round tokens. They are available in a selection of different colors, which each represent various milestones in sobriety.

AA sobriety chips are also created with a variety of materials. These materials include aluminum and brass, sometimes with gold or silver plating.

Some tokens may even feature crystals.

Here are some types of AA coins:

What Do AA Chip Colors Mean?

Sobriety coins are handed out to mark a milestone for a person working toward recovery and sobriety. An individual could also expect to receive recovery medallions and coins when they enter an alcohol treatment program.

Here is what the AA chip colors mean:

What is the Color for Sobriety?

All the colors of tokens represent sobriety. Sobriety coins are given to mark specific milestones of sobriety.

For example, you may receive a red chip to represent five months of sobriety.

How to Get AA Chips

People in recovery can receive sobriety chips in a few different ways. Many people get AA chips at recovery meetings or after completing a treatment program. If you are a member of an AA group that does not hand out sobriety chips, but you would like to be part of the tradition, it is possible to switch to a different group that uses them.

If you receive an AA coin, you are not required to do anything specific with it. Its primary purpose is to function as a reminder of your daily decision to maintain sobriety.

However, many people decide to keep their AA coins in an easily accessible location, such as a pocket or purse. Others may place them in a special keepsake box. However, you can do whatever you like with an AA chip after you receive it.

What Is A.A.?, Alcoholics Anonymous, https://www.aa.org/pages/en_US/what-is-aa

Written by
Ellie Swain
Medically Reviewed by
Annamarie Coy, BA, ICPR, MATS
Annamarie Coy earned her B.A. Magna Cum Laude in Substance Abuse Counseling from Ohio Christian University. She is a Licensed Addiction Counselor Associate (LACA) in the State of Indiana
Written by
Ellie Swain
Ellie Swain earned her B.A. in Sociology from the University of Sussex in the United Kingdom. After working in digital marketing and copywriting after graduating, she transitioned to full-time freelance writing and editing. Ellie has a passion for social causes and writes regularly on issues of homelessness in which physical and mental health disorders are common among rough sleepers.
All Alcoholrehabhelp content is medically reviewed or fact checked to ensure as much factual accuracy as possible.