Adderall is the brand name for the combination medication used to treat attention deficit hyperactivity disorder (ADHD). This medicine is a combination of dextroamphetamine and amphetamine. 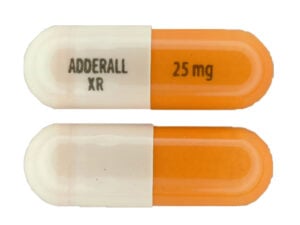 Adderall is often given as a prescription medication to patients with ADHD to help improve focus and concentration.

Adderall is a common stimulant for treating attention deficit hyperactivity disorder. It is categorized under drugs known as ‘stimulant therapy’ medications. It can improve ADHD symptoms in 70 to 80 percent of children and 70 percent of adults shortly after starting treatment.1

What is Adderall Prescribed to Treat?

Adderall medication is primarily used to treat ADHD. It is also sometimes prescribed to treat narcolepsy (an abnormal sleep condition that affects the central nervous system).

ADHD is a neurodevelopmental disorder of the central nervous system that affects mental health. It is usually diagnosed in childhood and extends to adulthood. Common symptoms of this condition include inability to focus, poor impulse control, aggression, mood swings, anxiety, depression, and low self-esteem.

According to the Centers for Disease Control and Prevention (CDC), about 6.1 million children living in the U.S. were diagnosed with ADHD in 2016.6 Stimulant drugs like Adderall have been the pharmacological treatment of choice for people with ADHD. The prescription stimulant has shown to be effective for treating symptoms like disruptive behavior, inattention, aggression, and impulsivity.3

Research has shown a link between the neurotransmitter dopamine and ADHD and other neurological disorders such as Parkinson’s disease. Dopamine affects mood, motivation, and attention. Health experts believe that low levels of this neurotransmitter can predispose someone to ADHD.

Side Effects & Risks of Adderall

Even though doctors usually prescribe Adderall to treat ADHD, this prescription drug is not without side effects.

Adderall can also be harmful to your health. Its side effects on the body range from mild issues like insomnia and loss of appetite to more severe issues like heart attack, seizures, and mental health disorders.

The Adderall medication guide which has been approved by the U.S. Food and Drug Administration pointed out some of the common side effects of Adderall.

Studies on whether the side effects of Adderall increase with higher doses is still vague. However, scientists have discovered that cases of side effects are low and similar to other ADHD medications.7

Common side effects of Adderall include:

Other side effects and risks that may be associated with the use of this prescription drug include:

Since ADHD medications like Adderall can increase blood pressure and heart rate, there is a possibility that they can cause cardiovascular problems such as stroke and heart attack, particularly in people who have preexisting heart problems.

Not everyone experiences side effects with stimulant drugs like Adderall. However, for those that experience them, most of the side effects can be managed by adjusting schedule and dosage and giving the patients time to get used to the drug.2

Why Do People Mix Adderall and Alcohol?

Most times, people who mix Adderall and alcohol do so out of ignorance. They believe Adderall helps keep them focused throughout the day, while alcohol helps them cope with stress and other symptoms of ADHD, such as depression.

Mixing alcohol and Adderall can predispose you to various health risks such as:

It can also increase your risk of alcohol intoxication.

Is it Safe to Mix Alcohol and Adderall?

No, it is not safe to mix alcohol and Adderall. Alcohol is a depressant, while Adderall is a stimulant, and combining the two can cause some negative side effects, including:

Side Effects of Mixing Alcohol and Adderall

Even though Adderall is beneficial for treating conditions like ADHD, it has a high tendency of abuse and misuse. One way people misuse this drug is by mixing it with alcohol, which can cause serious side effects that can be life-threatening.

Short-term effects of mixing alcohol and Adderall include:

When you abuse Adderall and mix it with alcohol, it can cause some side effects in the long run, such as:

Adderall can be addictive, especially if you are taking Adderall and drinking alcohol. Mixing the two can increase your risk for a substance use disorder (SUD).

Constant use of Adderall at an unprescribed dose (substance use) can cause you to build up some tolerance; which, in turn, can lead to addiction.

Misuse and use of ADHD medications, particularly by college students and even by people who have not been diagnosed with ADHD, has increased over the recent years. This is mostly because of misconceptions or ignorance. College students who have resorted to taking Adderall for enhancing athletic performance should be informed of the dangers of drug or substance abuse.4

Adderall comes with a black box warning which states that it has a high potential for abuse. Also, misuse of this prescription stimulant can lead to cardiovascular issues and eventually death.

Symptoms of Alcohol and Adderall Misuse

When people misuse substances like alcohol and Adderall, it tends to disrupt their body’s chemical signaling, thus causing symptoms that can be life-threatening.

Someone that abuses alcohol and Adderall will most likely experience the following symptoms:

Treatment Options for Polysubstance Use

Polysubstance use means being dependent on or addicted to multiple drugs or substances simultaneously (e.g., mixing Adderall and alcohol). It also means alternating between multiple drugs in an attempt to counteract each drug’s side effects.

However, there are many risks involved with polysubstance use. Combining alcohol with medications (whether prescribed or not prescribed) can lead to unwanted and unpredictable consequences.7

Fortunately, there are treatment options available for polysubstance abuse, such as:

The key to treating substance use is to provide each individual with the best care tailored to meet their specific needs. Identifying what led the person to use substances in the first place is one of the best approaches for successful addiction treatment and long-term recovery.

“National Prevalence of ADHD and Treatment.” Centers for Disease Control and Prevention, 9 September 2020.

“The Effects of Combining Alcohol with Other Drugs.” University Health Service, University of Michigan.