What is Ativan (Lorazepam)?

Ativan is the brand name for the drug Lorazepam, which belongs to a class of medications called benzodiazepines (also known as benzos). Ativan is prescribed to treat anxiety and sleeping problems that are related to anxiety. Ativan is also used to help patients relax before an operation or medical treatment. 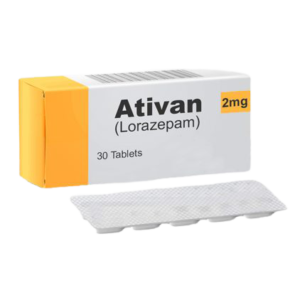 Ativan comes as tablets and as a liquid that users can swallow. It can also be given as an injection in hospitals for patients with epilepsy who are having seizures.

Like other benzodiazepines, Ativan has a high potential for misuse due to its sedative properties. They can produce highly pleasurable feelings. Ativan users can rapidly reach a point where their frequency of consumption and dosages constitute severe substance misuse.

Side Effects of Ativan

Common side effects of Ativan include:

These common side effects happen to more than 1 in 100 people. If you experience any of these side effects, you should keep taking the medicine and speak to a doctor.

Serious side effects of Ativan include:

Is it Dangerous to Mix Ativan and Alcohol?

You should not take any street drugs or alcohol while taking Ativan. It is dangerous to mix Ativan and alcohol. Ativan causes side effects, including drowsiness, which the use of alcohol can worsen.

Alcohol and Ativan are both central nervous system (CNS) depressants. It is dangerous to mix two or more depressants because they compound each other’s effects, including sedation, lowered blood pressure, and respiratory depression.

Ativan and alcohol both affect the neurotransmitter gamma-aminobutyric acid (GABA), which influences bodily functions. Ativan mixed with drinking alcohol can increase the likelihood of seizures, panic attacks, insomnia, and other side effects.

Ativan is generally safe but becomes dangerous when combined with alcohol consumption. Between 2005 and 2011, about 1 million emergency department admissions involved benzodiazepines, but most of them occurred while the user was also on opioids, alcohol, or both. It is rare for overdoses to be caused solely by benzodiazepines like Ativan.

Side Effects of Mixing Ativan and Alcohol

Common side effects caused by combining Ativan and alcohol include:

Serious side effects caused by combining Ativan and alcohol include:

Dangers of Mixing Ativan and Alcohol

Long-term use of Ativan and alcohol can intensify damage to the stomach, liver, heart, and brain. This is because benzodiazepines increase how effectively alcohol can cause intoxication.

Chronic drowsiness is also a side effect of long-term Ativan and alcohol use. There is an increased risk of oxygen deprivation from depressed breathing, causing damage to the brain and body.

If you suspect someone you know has overdosed on Ativan, look for the following symptoms:

What to do if you observe an Ativan overdose:

You should not leave the person alone while waiting for medical personnel to arrive. If the individual appears unconscious, try to get their attention and provide light physical stimuli to rouse them and keep them engaged.

You should let the emergency responders know any other drugs or medications the person is taking, including over-the-counter drugs.

Physical dependence or addiction occurs due to an individual taking certain drugs over relatively long periods.

When someone chronically uses or misuses certain classes of drugs, their system becomes acclimated to having the drug present and learns to function at a steady level only when the drug is present in their body.

Once they abruptly stop taking the medication, their system is thrown off balance, and this produces several physical symptoms known as withdrawal symptoms.

Symptoms of Ativan withdrawal include:

Ativan withdrawal can be potentially dangerous and even fatal due to the potential to develop seizures during the withdrawal process.

Symptoms of alcohol withdrawal include:

Because alcohol and Ativan share some of the same withdrawal symptoms, withdrawal from both simultaneously can cause these symptoms to worsen.

Signs of Alcohol and Ativan Misuse

Signs of alcohol and Ativan misuse include:

Treatment for Ativan Use & Misuse

If you suspect a loved one may be misusing Ativan, you should contact an addiction specialist to discuss the situation and get advice on how you might proceed.

Treatment options for Ativan misuse include inpatient, outpatient, partial hospitalization, and detox programs. Addiction treatment includes therapy that can be provided in various formats and models and in both one-to-one and group settings.

Withdrawal from benzodiazepines can be fatal, and you mustn’t attempt to detox on your own. Speak with a healthcare professional to find out how to detox safely.

If you suspect a loved one is misusing Ativan and alcohol, you should contact an addiction specialist immediately for advice on the best treatment program.

It’s dangerous to quit Ativan cold turkey, especially if you’re mixing the drug with alcohol. Abruptly stopping your Ativan use can lead to damaging physical and psychological symptoms, ranging from nausea and fatigue to hallucinations and suicidal thoughts.

The safest treatment for Ativan addiction involves gradually tapering the medication over an extended period. Users must do this type of detoxification under the care of a doctor.

Drug addiction treatment options for polydrug abuse include inpatient, outpatient, detox, and partial hospitalization programs. The proper treatment program depends on each individual’s needs and will factor in any other drug abuse or mental illnesses present.